The Sydney Fish Market is a tourist destination, wholesale fish retailer, and commercial area in the Pyrmont suburb just west of the CBD. We’d been wanting to check it out for a while, so it was good to go on a day that we were determined to make a real meal because we came back with something fresh to eat. After browsing the rows and rows of fish and shellfish, we decided on the red emperor filets because they were reasonably priced but sounded fancy and were caught in Queensland, a place we recognized.

Googling recipes upon return home revealed that the red emperor is merely a tropical snapper, but our hopes were not dashed! This recipe inspired the tomato basil salsa we put on top of the pan seared filet, and it added a lot of flavor to the already meaty white fish. 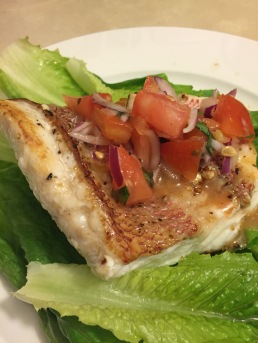 I’ve been a fan of lettuce wraps since my mom made them with ground turkey when I was a kid, so I was glad to find a similar dish with tofu. Instead of the soy and hoisin sauce, I used peanut butter and made some rice noodles as a base, inspired by this one. I love the flavor combination of peanut butter with ginger and green onion plus the crunch of water chestnuts. It was even more awesome as leftovers.

When my family was here, we had them over for a 4 course meal, three of the courses containing some piece of a butternut squash. Aaron is very proud of the way the squash leek soup turned out – if you know us, we are bound to make this for you at some point. The salad was a simple arugula, pear, cashew mix with roasted squash seeds and a lemon juice/olive oil dressing. For the “main,” we did a repeat of the veggie gratin discussed earlier,  which turned out similarly. 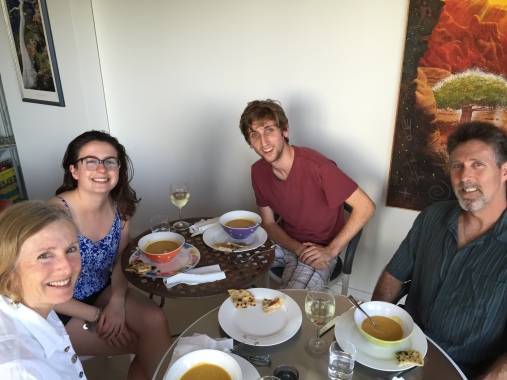 I was most excited about the dessert, made to satisfy the sugar-free and a dairy-free diets among us. Chocolate avocado pudding has been on my radar, but after finally making the leap and conjuring it, I’m sold. The sweetness came from agave nectar and the cocoa was an unsweetened powder. The powdered sugar and blueberries were optional additions, but the texture was just as creamy and satisfying without them.

One thought on “Foodstuff Pt. 4”